A personal reflection on why so many public sector projects go wrong and what lessons we can learn.

Half a lifetime ago, I was a newly-minted 27 year old partner, entrusted with day to day control of the privatisation of the tech and telecoms division of British Rail.  Now that experiment has run into the buffers, with the whole system effectively being re-nationalised.

I reflect below on why this enormous enterprise foundered, and look at other major public sector projects I have been involved in.  Much of this has been published before: sadly I think my comments are still largely relevant.

In the UK at least, the government has announced unprecedented investment in infrastructure, including massive rail and other transport projects.  The Covid-19 crisis has only heightened the need for public investment to protect jobs: and the risk that the same mistakes will be made again.

Another factor that adds to the pressure to get these projects right is that the legal and regulatory environment is now far more rigorous and the risks of legal liability (for a data breach, environmental damage, lack of attention to health and safety) are far greater.  And so is the risk of public opprobrium for failure to respect the rights of employees and workers.

I have had a ring-side seat on some of the biggest public sector technology and infrastructure fiascos of the last 3 decades, from the privatisation of British Rail’s tech and telecoms to the NHS’ abortive attempts to introduce a new national IT system.  Of course, many other lawyers could say the same, so my aim in this article is to identify common themes I have noticed in these failed deals.  I want to examine them for lessons that lawyers, other advisors – and clients – might want to learn.

I would categorise the themes as:

any or all which often lead to:

The then Secretary of State told Parliament that the privatisation of British Rail would take effect on 1 April 1994 – an appropriate date.  The Railways Act 1993 was drafted accordingly and the teams of lawyers from all the major firms worked to that deadline.  We did our collective best, but we knew there were far too many loose ends left untied and too many “agreements to agree”.

Of course, most deals end up with a last-minute flurry of activity and are driven by deadlines, but the great public sector transactions are vastly more complex than those in the private sector and have a far greater ability to impact the lives of millions of people in an immediate and direct way.  The contractual side of the privatisation of British Rail was fudged to meet a politically driven deadline and we spent months afterwards quietly doing properly what should have been done better the first time.

The frequent concomitant of expediency is ambition: setting up a project that is simply too complex and where the promise of technology and what it can deliver is not matched by a common sense analysis of the likelihood of success.  The National Programme for IT (NPfIT) is a prime example, which I examine below.  First I want to look at fear of risk which bedevils government departments yet which is ironically at odds with the political risk-taking which unrealistic ambition can lead to.

A decade after British Rail, I was advising a major government department on the re-negotiation of a failing multi-billion pound technology services deal.  After analysing the vast contract documents (and more on that later) and the actual performance of the service provider, it appeared that there was in fact no significant failure to meet the service levels.  What was wrong was that the parties had put their respective “Z Teams” on managing the relationship and that this had led to the perception that the provider wasn’t performing.  There was the usual mismatch of expectations and poor communication – which no amount of drafting can sort out.

What we did identify though was that there actually had been a significant breach of contract by the service provider in relation to one obligation and that the contract had been drafted so that it was clear that this would amount to a breach of condition, giving the right to terminate.  The aim of course was to renegotiate the deal, but in the analysis of the carrots and sticks available to my client, having a clear termination right ranked fairly highly on the stick side of the equation.

However, the decision-making process in the Department was clouded by two fears:

This led to a degree of institutional disinclination to take risks or to act in a robust way when it came to negotiations, as well as a filtering and softening of legal advice as it progressed up the chain to the IT director and the Permanent Secretary.  Additionally, no individual was inclined to take ownership of decisions – partly due to the fear factor and partly as each expected to be moved shortly to some other function and did not want to be tainted by unwarranted boldness on this project.

By contrast, in private sector deals there is usually someone at “C” level within the buying institution who is personally backing the scheme and who will pay for failure with, at the very least, a diminution in his or her authority.  It is trite to say “nothing ventured, nothing gained”, but it is true in business and in the public sector: if you can’t take a calculated risk, you can’t expect to reap the benefits of your actions.  Another cliché: “no pain, no gain” – easy to say but difficult to implement in public sector institutions; yet I would say that government departments have no business in taking on major projects unless they understand that allocating and accepting risk realistically is key to success.

I acted for one of the principal bidders on NPfIT: the ambitious programme to digitise patient records and scans/x-rays so that they would be available instantly whenever needed.  The promise was that patients and practitioners would have online access to information and also the ability to schedule appointments and request prescriptions.

What we actually got was the “NPfIT fiasco”, as described by Richard Bacon MP, a member of the Public Accounts Committee, with contracts being terminated and ultimately the whole project being abandoned.  There were many reasons for this, but one I would pick on (not least as it led to a number of potential service providers pulling out of the procurement process) was that the contract documentation was too one-sided in favour of the Department of Health.  Specifically, it sought to pass integration risk (ie the responsibility for ensuring that all the individual providers of goods and services worked together to provide an “end to end” solution) too far down the contractual chain, to parties that could not manage this risk.  A highly simplified diagram may illustrate this: 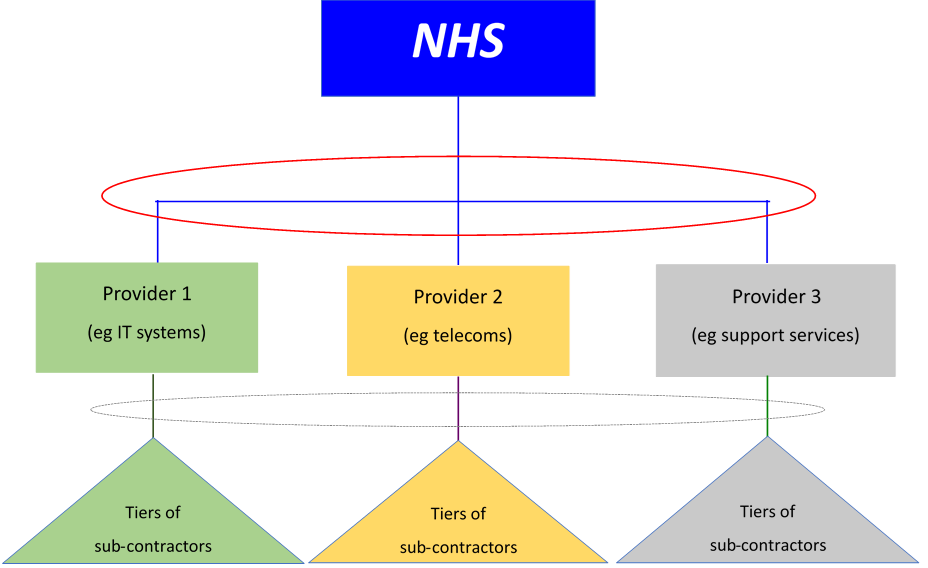 The straight lines represent contractual relationships and the red ellipse shows where the integration risk lies. What the structure demonstrates that there was no single point of contact (no single “throat to choke” as the phrase goes) with the service providers so the contractual (and therefore the actual) responsibility for ensuring that everything worked fell back on the department. This would have been fine had the department had the skills and the stomach to project manage such a complex structure – but of course that wasn’t its function.

Instead, in the proposed contracts the department attempted to push the integration risk down to the various lead providers (three, in the above example). However, they had no contractual relationship with each other and therefore no legal means to manage and allocate risk. At best, there might be common protocols and governance processes (the dotted ellipse) but none of the principal providers would have the legal ability to manage (and therefore the commercial desire to take) the risk that one of the others might let it down. In the context of a multi-billion pound high-visibility procurement, why should they? After all, they were competitors in the real world and collaborated only when it was in their commercial interests to do so.

Such structures are inherently unstable and unfair, but I have seen them replicated again and again in public sector contracts.

The end result of these factors is, all too often, pressure on the legal advisors to adopt the same approach – and to lose their sense of proportion. In fact, one reason why I think it is vital for lawyers advising on public sector deals to have experience also of transactions in the commercial world (and to act for both service providers and buyers of services) is to lessen the risk of this happening.

However, lack of perspective – one might even say lack of common sense – too often leads to contracts that cannot be used by real people who have to make a real deal work in the real world. The contract serves neither to set out the narrative of the deal nor to act as the record of its terms and enabler of the underlying relationship. It becomes a straight-jacket into which the transaction must be strapped.

In particular, the common problems I come across are:

No-one wants to see taxpayer money thrown away or contractors making undue gains from public-sector need. However, there is a balance to be struck and the consequences of this approach to documenting public-sector technology procurements tend to be:

The private sector also has a long tradition of failed technology deals and there have been public sector successes. I have also largely ignored in this note the regulatory constraints and public procurement rules which bind the hands of government. However, I think that the themes I have outlined above do bear down too powerfully on public sector procurements, to the detriment of all concerned – and all of us.

You cannot fix this by simply grafting a private sector procurement specialist onto a public sector team: there is a more fundamental shift in attitude to risk which I think needs to take place. This is not something which lawyers can hugely influence, but I do think we need to be more robust in countering our public sector clients’ fears and resisting the temptation to deliver up a many-hundred page contract and an even longer set of procurement rules.

It may be a gross simplification, but if a contract is unbalanced as to risk allocation and is essentially incomprehensible to those charged with making it work, it is likely to founder. And that is not in the public interest or the interest of service providers or advisors either – which ought to be the same thing.

Rory Graham is a tech and sourcing partner in FisherBroyles, having previous led practices at Bird & Bird and Baker McKenzie and set up his own tech boutique firm, Coffey Graham. He has acted on over £50bn of transactions worldwide, has written and lectured extensively on technology-related law and was the first legal director of the Global Sourcing Association, of which he is a Founding Fellow.

Founded in 2002, FisherBroyles, LLP is the first and world’s largest distributed law firm partnership. The Next Generation Law Firm® has grown to hundreds of partners in 23 offices globally. The FisherBroyles’ efficient and cost-effective Law Firm 2.0® model leverages talent and technology instead of unnecessary overhead that does not add value to our clients, all without sacrificing BigLaw quality. Visit our website at www.fisherbroyles.com to learn more about our firm’s unique approach and how we can best meet your legal needs.

These materials have been prepared for informational purposes only, are not legal advice, and under rules applicable to the professional conduct of attorneys in various jurisdictions may be considered advertising materials. This information is not intended to create an attorney-client or similar relationship. Whether you need legal services and which lawyer you select are important decisions that should not be based on these materials alone.